This page is archived, it is stored here for informational purposes only. 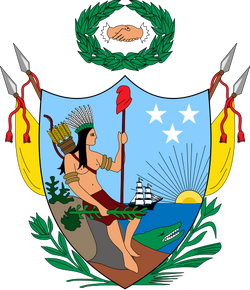 The following is the official law to the entire Kingdom of Gran Colombia written and set out by the first semi-democratic King, Simon Bolivar of the House of Bolivar. It lays out duties of those in government and the power of those in these seats. This also explains the duties of each part of the government including the Judicial Court.

Section I - The Monarch[edit | edit source]

The Monarch's power is still powerful and can do whatever it may feel should the time be necessary to take control, however no monarch after Rey Simon Bolivar I has the ability to revoke this document. The Moarch may overrule the Lord Judge or Hand of the King in Judicial Court cases.

The Monarch is designated the role of Minister of State. They are to conduct diplomacy with other nations themselves while the internal government governs itself on its own. This is a permanent right that can not be amended nor revoked unless done so by a reigning Monarch who may bestow the right on another leader or a new position.

The Monarch is designated and will always be designated as the commander-on-chief of the military. Not only this but they may also declare war, move troops, deploy troops to occupy specific areas of the empire, etc. It is though required that he/she speak to the Chief of Military Advisory prior to making any of these decisions or actions.

The Position of Monarch is not gained through hereditary means but by means of public support. The monarch serves until death or resignation. Upon the death or resignation of a monarch, the Grand Council members are promoted one spot until they have a new monarch elected by national elections.

The Black Court is a system of courts that are headed by a judge that hold trials and hearings when laws may have been broken. They are to be unbiased and are hand chosen by the Lord Judge, Monarch, or Grand Council.

The Lord Judge sits on the Grand Council, providing legal insight but also is head of the Black Court. They are chosen by the Monarch solely. The Lord Judge, like the rest of the other judges on lower levels, is to be unbiased in important hearings and trials to the Kingdom and must base his rulings on what is legal.

The Judicial Court is as said so before, a system of courts, which are assembled as follows...

The Judicial Court establishes 1 large court per each province with its own leading judge that hears out trials and hearigs that may break a provinicial law. The leading judge is known as the Duke's/Duchess' Justice who is accompanied by 3 others judges who have the same duties with the exception of managing the Provincial Judicial Court. The Duke's/Duchess' Justice is selected by the provincial leader and submitted for approval to the Lord Judge.

The Judicial Court establishes a smaller more local court per each town with its own leading judge known as the Justice of their town name and is accompanied by 2 others judges who have similar duties. The Local Judicial Court's judges are selected by the people of the town through an election process. They handle the majority of trials and hearings in Gran Colombia.

The Grand Council is the Monarch's advisors and law making assistants. THeir duties are defined below.

Clause I - Hand of the King[edit | edit source]

The Master of Coin sits on the Grand Council and reports the income and any other finance related to the government including trade with other countries. It is important that they inform the council of financial dealings. Like the Hand of the King, the Master of Coin is appointed by the Monarch. However, candidates can be suggested by the Hand or temporary appointments can be made.

The Master of Laws sits on the Grand Council and gives input on what is happening and also is the official spokesperson, or scribe, of the Kingdom. They also work closely with the King in writing new legal documents and reviews current laws that may need to be reformed. Like the Hand of the King, the Master of Laws is appointed by the Monarch. However, candidates can be suggested by the Hand or temporary appointments can be made.

Retrieved from "https://mc-nations.fandom.com/wiki/The_Gran_Colombia_1820_Document_of_Freedom_(Archived)?oldid=13489"
Community content is available under CC-BY-SA unless otherwise noted.