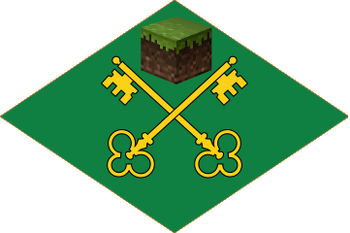 Minecraftism is a religion of people who believe in Notch, the God of Minecraft. They also believe that Herobrine, is the destroyer, the one true evil sought to destroy Notch's work. The basis of the religion is seeking enlightenment, which would ascend players into the Heavens. This could only be achieved once a follower has fulfilled all the principles of Minecraftism.

The Mojang is the highest of followers for the religion of Minecraftism. Only the closest to enlightenment or the most dedicated to Minecraftism may be accepted into the Mojang. To be accepted, you must follow an extensive process set by Notch. This process is called Minecrafting. The sacred process must be followed completely, step-by-step, detail-by-detail. Failure denies a follower from joining the Mojang until a great quest is accomplished, and the Player redeems themself.

The AB is the council that manages the Mojang. AB stands for Apostles of the Beginning.

The Cyan Council consists of the Mope and the Azures. This council makes major decisions when present with a religious crisis.

Mishops are the normal leadership of the Mojang.

Power does not go without responsibility. In Minecraftism, each position in the Mojang has it's own responsibilities to follow by.

The Religion of Minecraftism has several establishments that preach its religion.

This is a list of establishments currently in use.